Bonnie: You expect me to eat that?
Victor: Nom nom nom

(Bonnie scorns the food while Victor digs in... Bonnie doesn't like canned food.)

(slurp) No, really, you should try this!
Absolutely not! I have standards!

(Certain she's being poisoned, Bonnie has Victor eat first, then checks his health)

(Poor Bonnie... she's unhappy with the food, embarrassed she was so tolerant of Victor, AND giving Mom the fuzzy (cold) shoulder.)

Poor Bonnie! We're trying to give her Glucosamine for cats, but she doesn't like the food we add it to! She only likes food that goes CRUNCH. And Victor? He'll happily eat almost any canned food, Bonnie's share as well as his own, and the meds won't do him any harm. But he's... gained a little weight.


Weekend Cat Blogging with Sher & Upsie at What Did You Eat
Bad Kitty Cats Festival of Chaos at Mz. Mog & Kitty Cats at Mind of Mog
Optional Theme - Tummy Poses
The Carnival of the Cats #201 at Missy, KC, Sol & Smokey Sunday Evening

Posted by Victor Tabbycat at 10:00 PM 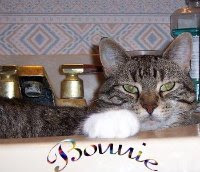 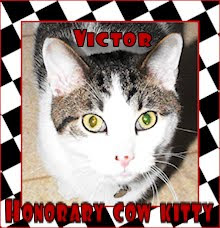 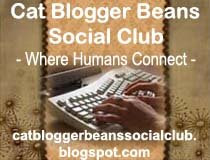